Darfur and the Nature of Giving

The Bill Graham Award is designed to support groups that help children who are oppressed or are refugees. The recipient in 2005 was Mercy Corps. The money was earmarked specifically to support their work in the Darfur region of western Sudan where, under the pretext of suppressing an internal rebellion, government-backed militia units have massacred thousands of innocent civilians, and since 1993 the ongoing conflict between non-Arab rebel groups and the government forces has forced the displacement of an estimated 2.4 million Sudanese, many to over- crowded refugee camps in western Sudan and eastern Chad. (Link to more background information on the situation in Sudan.) Over the past year Mercy Corps staff in Darfur have been struggling to provide the refugees with clean water and rudimentary sanitation, and to provide basic schooling to refugee children and to train volunteer teachers and aid workers. 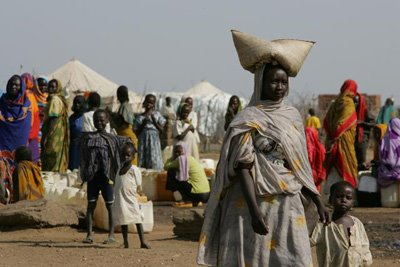 Rex: How many Mercy Corps staff are currently working in the villages and refugee camps, and what are their primary goals?

Mercy Corps:We have a team of 16 international and 200 Sudanese staff working to provide clean water, prevent the spread of infectious diseases like malaria and distribute shelter materials to over 100,000 displaced persons. In West Darfur, Mercy Corps is providing educational supplies and services to over 16,000 war-affected children. We are constructing 180 temporary classrooms and rehabilitating 3 schools for the long term. Weâ€™re facilitating the training of 160 volunteer teachers and constructing 88 teacher accommodations. Our goal is to increase the number of war-affected children in school while improving the quality of education provided.

Rex: All the evidence seems to say that, in spite of its denials, the marauding militia is supported by the Sudanese government. What is your organizationâ€™s position on this, and if it is true, are your staff themselves in danger of government-sponsored reprisals?

Mercy Corps:Relief operations like this one always involve a certain amount of risk. Our staff knows that. At the same time, if we felt they were in serious danger we would take appropriate action. Our ability to operate in the area depends on the permission of the Sudanese government. Who is supporting whom in Darfur is a fluid debate. What is increasingly clear is that the various militia are increasingly undisciplined. The rebel movement has become severely fractured and the various factions are fighting deadly skirmishes against each other. It is highly questionable if militia once supported by the government can be effectively reigned in, assuming there is the will to do so. Humanitarian efforts have been harassed from militia on all sides of the conflict. Major supply routes have been cut for months and aid convoys frequently have come under attack. Aid workers have lost their lives in ambushes, land mine incidents and, quite recently, in a helicopter crash during an emergency evacuation. 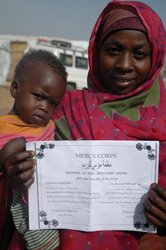 Rex: The situation in Sudan continues to escalate on a daily basis with the recent incursions deep into Chad by the militia, the additional displacement of some 70,000 people as the result of renewed fighting between the government forces and the Darfurian rebels, proliferating banditry, and continuing attacks on civilians by the government-supported Janjaweed militia. How is it possible to carry on your humanitarian efforts in such a volatile and incendiary environment?

Mercy Corps: We are thankful that the camps in which we are working are in a relatively calm area, making it easier for our staff to operate and giving the displaced persons a shelter from the violence, hunger and disease that have forced them from their homes. Still, Darfur is a dangerous environment. We take the security of our staff very seriously and work to limit threats to their security though effective operating procedures and our strong relations with the UN, our government hosts and the communities we serve. 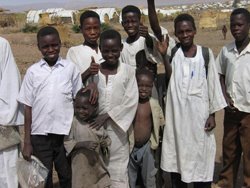 Rex: Itâ€™s easy for someone in the West to read about crises like this one and feel that the scope of the problem is so overwhelming that itâ€™s hopeless. What do you say to someone who may ask â€œWhat good can my modest contribution do?â€

Mercy Corps: One person can do a lot. Mercy Corps and other agencies depend on the contributions of concerned individuals and organizations. Even small donations add up. For example, $22 provides a sheet, a blanket and a woven plastic mat for a displaced person. Just $15 makes possible safe, clean water for one person. For even less money, we can purchase mosquito nets for 10 people, helping prevent the spread of malaria. Also, make your voice heard by decision-makers. Stay informed about the issue and contact your representatives in Congress to let them know you support continued US assistance for the African Union peace-keeping force and humanitarian aid.

Rex: In summary, what would you like visitors to the Rex Foundationâ€™s web page to understand about Mercy Corpsâ€™ efforts in Darfur that they may not have appreciated before?

Mercy Corps: Maybe the most important thing is that, despite all the terrible things that have happened to them, the people of Darfur continue to have hope. They continue to look forward to a better future and a chance to rebuild their lives. Whether itâ€™s families and neighbors making traditional music together or kids playing soccer outside their temporary classroom, the resilience and determination of these people is amazing. And Mercy Corps will continue to be there; helping them pull their lives back together and start the long road to recovery. 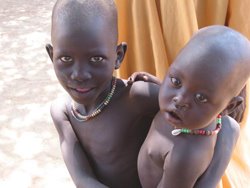 Rexâ€™s support of Mercy Corps is a diversion from our tradition. In keeping with Rexâ€™s founding principle of supporting community-based projects, we generally have not given grants to organizations with annual budgets exceeding one million dollars. The urgency of this problem was one factor in our decision. And, although Mercy Corps is a very large organization with a world-wide reach, a staff of several thousand, and an annual budget of approximately $150 million, our research indicated that this organization uses its money very effectively. John Leopold, the Rex board member who initially proposed Mercy Corps for this award, talked to many people working with various relief groups, and, based on a recommendation from the Executive Director of Seva, a long-time Rex grantee, contacted Mercy Corps. In his words:

“After contacting Mercy Corps I found that they were working in a region of Darfur that was not well served by other relief organizations. They had started their relief work in Sudan later than some other aid organizations and did not want to duplicate any other ongoing efforts.

â€œTheir project focuses on helping create a space for children to play, to learn and to train parents and others to help them with psychological counseling. Although they received some funds from the U.S. AID program, their funding for the work in Darfur was dangerously close to running out. Our grant of $10,000 would enable Mercy Corps to continue running a worthwhile program that was under threat of closing for lack of funds. We earmarked our grant for this effort.

â€œAs a relatively small foundation, Rex has always tried to support grassroots groups who have not received mainstream funding and to support organizations where our funds could play a critical role. This opportunity with Mercy Corps squarely fit these criteria.

â€œIn addition to the funding, I hope that the award sparks recognition among the wider Rex community about the crisis in Darfur. Only by shining a light on this terrible situation will we be able to hold leaders accountable for working to end this human tragedy.â€ 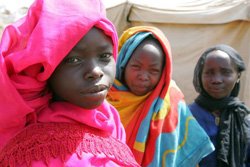 While it would be natural to see the scope of the problem in Darfur as so enormous that Rexâ€™s money looks like a very small drop in a very large bucket, John Hanson makes it clear that in fact here is a situation where, although the need is tremendous, even a few dollars really can make a difference. But the larger question of â€œwhy bother when my contribution is so small compared to the needâ€ can be answered, we feel, even in those situations in which, unlike this one, a few dollars may not have a measurable impact. Humans are by their nature communal. By making a contribution, even a small one, we confirm our commitment to the community of man. And by contributing we strengthen our sense of self. We remind ourselves who we are, and what we believe in. This, we believe, gets to the true nature of giving.

Background information on the situation in Sudan