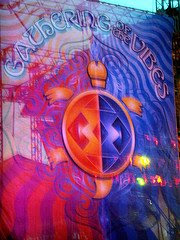 On Saturday, August 2nd, we had a plan to hold the final Rex Jam of the summer with the New Riders of the Purple Safe (affectionately “NRPS”) at 2:30 in the afternoon. Because they were not the first band on the stage that day, and the weather had been extraordinary all weekend, I had anticipated a great event. I have said it before and I’m saying it again… I’m not always right. At about 12:00 on Saturday afternoon, the sun disappeared, the clouds grew heavy and skies opened up. I dare say I can not recall a time where I have been in an “out-door environment” in such a storm. Lighting strikes, thunder claps, strong winds and heavy rain certainly created chaos in Seaside park. As the rain continued in the the 1:00 hour… I began to wonder what was going to happen to the Jam. The music was halted when Alternate Roots was called from the stage. I figure there would have to be some cancellations and was not sure if NRPS would even play. As I stood in the relative safety of my friend’s vending booth – I contacted volunteers and asked them to hold tight until further notice… I contacted Harry Moran, our Non-profit contact, for his thoughts… he said to hold tight until further notice… I contacted Toast, manager of NRPS… he said hold tight until further notice. So we held tight.

The rain finally ended and more chaos ensued. What would the new schedule be? Are NRPS palying? Is that other storm going to move in and hit us too? We had “missed” the volunteer meeting, but my folks were waiting patiently. I finally decided to go backstage, as the storm seemed to have passed. Next thing I knew, Toast was telling me they were going on any minute. It was Whiz! Bang! Spring to action! Harry raced me over to the vendor booth to get the buckets and mateirals, I sent a text to the volunteers to come ASAP! Everything seemed to be happening at once, I am ever appreciative to have had Miss Jen there. She has been with us for three Rex Jams this summer, and I relied on her to help gather the troops and give them the low-down because I had not time to meet with them before I made the stage announcement. After the announcement was finished, I rushed over to meet the volunteers with the materials.

I gave out buckets, bags and CDs, as well as my best advice and sent them out into the crowd to wait for the signal. Again – we had more volunteers than buckets, so I did not go out into the crowd. I think it was for the best this time, as I was so frazzled…. fortunately, no one seemed to notice but me. While on stage making the announcement I saw few friends in various locations in the crowd, and they all gave me the “hi” sign. Afterward, they gave me praise for my “performance” and said I looked very composed and natural. I was also ever-so appreciative when Toast told me the band would make some acknowledgment of the song (Garden of Eden) designated for the Rex Jam. Michael Falzarano made a comment to the crowd before the song, and I know that helped.

Beautifully, in spite of the mayhem – the Rex Jam was a raging success (ok, so I was right about something!). I am so proud to say that we raised over $2000 for the Bridgeport Central High School Musical Instrument program. This program is set up to purchase instruments so students who can’t afford their own can still learn to play and perform with the band.

I want to say here that being the Rex Jam Representative at so many festivals this summer has been such an honor and a privilege for me. It has brought me such joy I can’t even explain it. I have always said that I wish I was rich so I could give money away when I see a need…. I don’t have that kind of money – and this is a great substitute (giving away other people’s money where there is a need!).

A friend of mine asked me how much money we had raised this summer, and I hadn’t really given it much thought – but as it turns out, over the 5 Rex Jams and fund raisers we did this summer, we have raised close to $10,000. It is amazing to me. Yes – your dollars add up quickly people. All it takes is $5.00. Just $5.00…..