AN EVENING OF STORYTELLING 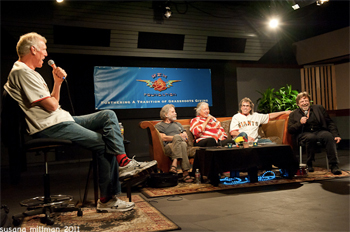 August 2011 – Inspired by Jon McIntire and Mickey Hart’s idea  of having  long-standing Rex board members tell stories about Rex grants that were especially memorable to them over the years, we recently were able to put together a special occasion at Bob Weir’s TRI Studios.  Having  seen Bill Walton’s magic in eliciting great tales at the Sacramento Kings’ Grateful Dead night, we sought out his involvement to orchestrate the conversation, as well as to share his own stories.

With a maximum of 25 attendees in the tiny studio, we arranged to have the storytelling video recorded so that this unique gathering and exchange could be documented and made available to a wider audience.  Now, we’re pleased to present some highlights.

The Rex Foundation is deeply grateful to Bill Walton, Bob Weir, Carolyn Garcia, John Perry Barlow, Jon McIntire (who was not able to attend), and Mickey Hart for coming together to support Rex, and to the attendees, whose generous contributions provided a huge boost to Rex Foundation’s grant making capacity.

Mickey Hart talks about the origins of the Rex Foundation

Bob Weir talks about giving back

Carolyn Garcia talks about the new model of philanthropy

Mickey and Barlow talk about the Lithuanian basketball team

Be the first to know about all things Rex Foundation!